First, the giveaway: Two paperback copies of the anthology Improper Christmas Nights, which contains two of my novellas, Under a Christmas Spell and Under a New Year's Enchantment. This anthology is for sale only in the UK and Australia, so I decided to have a giveaway for readers in the US and Canada. It's open from now until Dec. 30. To enter, go here. 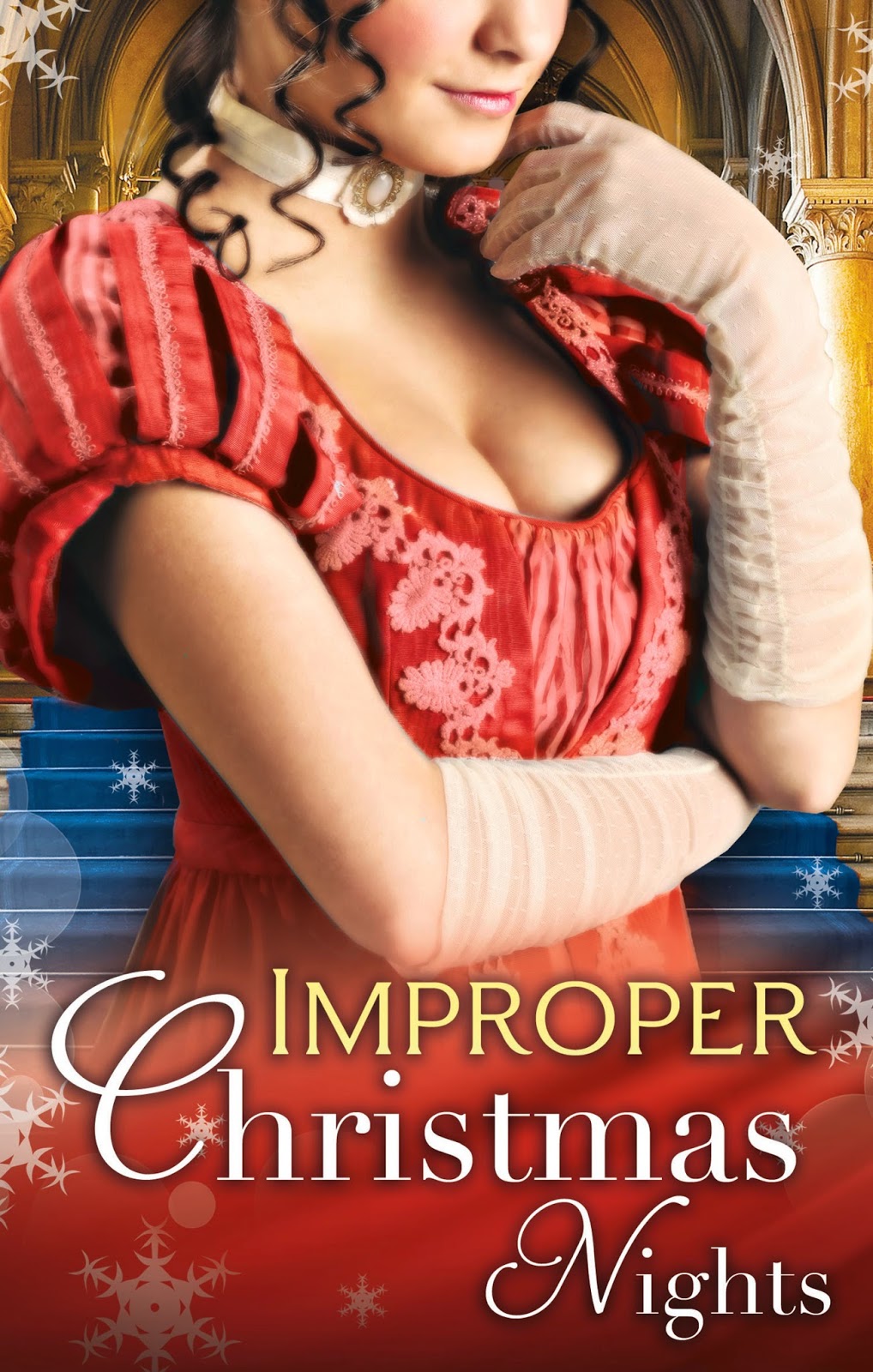 Also... today I'm over at Embracing Romance blogging about some favorite things (including socks) to encourage people to enter our contest. The prize is a gift basket loaded with great stuff contributed by the Embracing Romance authors.

P.S. The link for the giveaway didn't work -- I think I've fixed it.
Posted by Barbara Monajem at 7:00 AM No comments:

Only 99 cents! At last, here's the cover for the 7-author boxed set, Captivated By His Kiss, which is now available for pre-order everywhere...at the fabulous price of 99 cents! It will be released on January 12, 2015. My story, THE CHRISTMAS KNOT, is included. Details of all authors and titles are below: 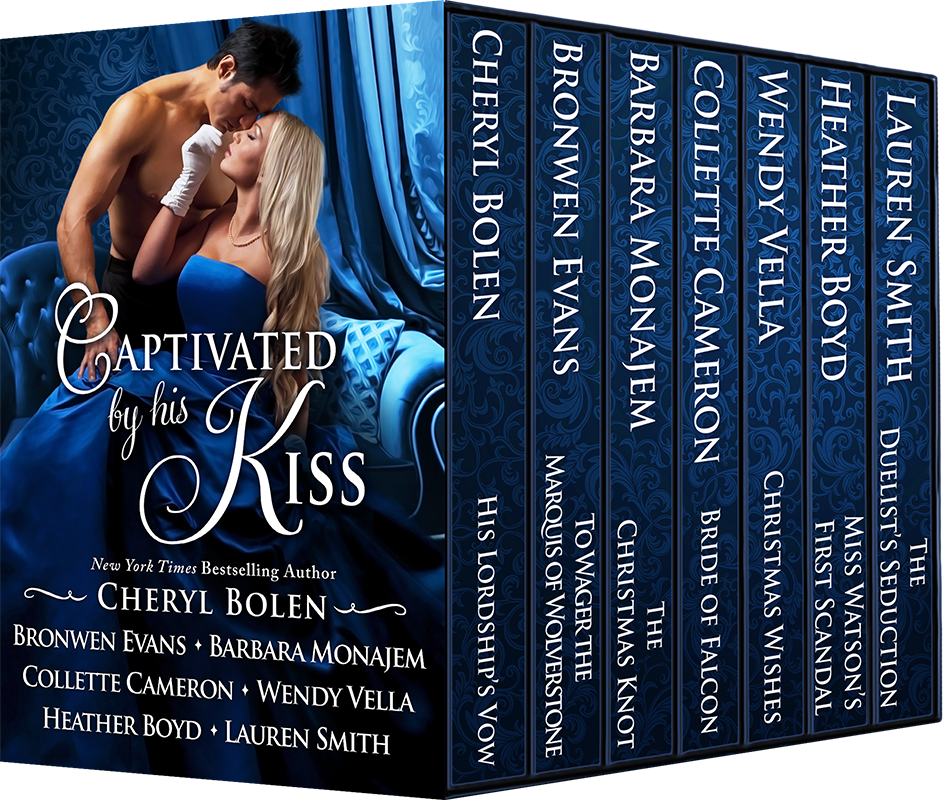 Bereft of beauty as well as fortune, the exceedingly plain Miss Jane Featherstone has failed to attract any suitor during her three Seasons. Rather than be a burden to her brother and his obnoxious wife, Miss Featherstone vows to accept the first man who asks—even though she’s always worshipped a lord who’s far above her touch. . .

Lord Slade must marry an heiress in order to honor the deathbed vow he made to his father, and he needs Miss Featherstone’s help in wooing her beautiful cousin. After her initial anger, Miss Featherstone agrees to his scheme, telling him she’s doing so because she admires his Parliamentary record of humanitarian legislation and his reverence for truth. But the more he’s with the two cousins, the more attracted he becomes to Miss Featherstone. What’s a man of his word to do? Break a vow to a beloved father—or follow his heart with Miss Featherstone?

Since her first book was published to acclaim by Harlequin Historical in 1998, Cheryl Bolen has written more than 20 books, mostly historical romances. Several of her books have won Best Historical awards, and she's been a New York Times and USA Today bestseller.
TO WAGER THE MARQUIS OF WOLVERSTONE

Marcus Danvers, the Marquis of Wolverstone, is renowned for his cynical demeanor. It's rumored that long ago, a beautiful woman broke his heart. Now he lives life for pleasure. That is, until the beautiful, as she is deceitful, Contessa Orsini re-enters his life with a wager he cannot resist.

Widowed and destitute, Edwina White takes a position as governess in a remote village in the north of England—in a haunted house. She’s so desperate that she’ll take anything, and besides, she doesn’t believe in ghosts. Little does she know that her new employer is the seducer who lied and deceived her many years ago.

Sir Richard Ballister inherited an estate with a ghost and a curse, and every governess he hires leaves within a week. Finally, a woman desperate enough to stay arrives on his doorstep—but she’s the seductress who dropped him many years earlier for a richer man.

The last thing Richard and Edwina want is to work together, but they have no choice. Can they overcome the bitterness of the past in time to unravel a centuries-old knot and end the Christmas curse?

Barbara Monajem wrote her first story at eight years old about apple tree gnomes. After dabbling in neighborhood musicals and teen melodrama, she published a middle-grade fantasy when her children were young. Now her kids are adults, and she's writing for grownups. Her Bayou Gavotte series of paranormal mystery and romance takes place near New Orleans and features hereditary vampires, a Native American telepathic rock star, and other characters with paranormal abilities. She also writes sexy Regency romances with bold, passionate heroes, spirited, adventurous heroines, and the occasional touch of magic. She lives near Atlanta, Georgia, with an ever-shifting population of relatives, friends, and feline strays.

After five Seasons, Ivonne Wimpleton has accepted she’s a haute ton undesirable. Always a bit ungraceful, her suitors are men desperate to get their hands on her marriage settlement. Guarded and aloof, she’s resigned herself to spinsterhood. She doesn’t mind her fate, since Chancy Faulkenhurst—known as Chance to his friends and the man who once held her heart—left for India years ago without an explanation.

When Ivonne’s father, Viscount Wimpleton, refuses Chance’s request for her hand in marriage, he transfers to the East India Troops. Chance’s dreams of making Ivonne his wife are soundly dashed. Ignoring her letters, he closes the door on his heart and Ivonne and remains in India.

Six years later, severely injured during a battle, Chance returns to England physically and emotionally scarred. His love for Ivonne remains just as strong. When he learns due to a whim of Prinny’s she must choose one of the despots whose offered for her hand, Chance is determined that none should have her but him. Except, not only is she infuriated he made no effort to contact her, in Chance’s absence, his father arranged a marriage for him and fully expects Chance to honor the agreement.

Award winning, Amazon best-selling author, Collette Cameron, has a BS in Liberal Studies and a Master's in Teaching. Author of the Castle Brides Series and Highland Heather Romancing a Scot Series, Collette writes Regency and Scottish historicals and makes her home in the Pacific Northwest with her husband and five mini dachshunds. Mother to three and a self-proclaimed Cadbury Chocolate chocoholic, Collette loves a good joke, inspirational quotes, flowers, trivia, and all things shabby chic. You'll always find dogs, birds, quirky—sometimes naughty—humor, and a dash of inspiration in her novels. Her motto for life? You can’t have too much chocolate, too many hugs, or too many flowers. She’s thinking about adding shoes to that list.

Past experiences have taught Miss Hero Appleby to distrust noblemen, especially self-indulgent rakes like Lord Caruthers. However she was desperate for money to support the orphans in her care this Christmas, so it is to him she must go. Perhaps it had been wrong of her to point out his many faults so boldly, but the man had reeked of last nights over indulgences, and that coupled with his indolent lifestyle, drove her to distraction and all thoughts of lady-like behaviour disappeared in his infuriating presence.

Max didn't remember much of his first meeting with the annoying Miss Appleby, thanks to the after effects of one good drink too many. But he vaguely recalled he'd promised her something, just to get her out of his house so he could suffer in peace. Unfortunately peaceful was the last word to describe her as he found out the next day. She was unlike any woman he knew - opinionated and rude certainly, but she worked selflessly to provide for children that were not even of her blood. Max had believed himself incapable of emotion yet Hero was making him feel things that he had believed were long dead. Could his long forgotten Christmas wish really come true?

Wendy Vella is a lover of all things romantic. Her novels are sensual with just a touch of wicked and set in the often intriguing backdrop Regency England. Writing is something she has always found time for; and penned her first novel at eighteen, though she is adamant it will never make an appearance further than the closet in which it currently resides.

Overworked London banker David Hawke has two goals for his week in the seaside town of Brighton: one, recover an overdue debt from a good friend and neighbor and two, relax for the remaining holiday without any further distractions. When his friend’s impulsive younger sister barges into his home to beg his aid, he’s drawn deeper into her life and scrambling to keep their relationship on a professional level.

Abigail Watson may be considered too young to have the cares of the world on her shoulders but her brother is in financial trouble and she’s desperate to help him recover. Despite the impropriety, she appeals to the bachelor next door for an extension on the debt and his help to secure her brother a wealthy wife. However, matchmaking never runs smoothly and falling in love is something neither one counted on.

Bestselling historical author Heather Boyd believes every character she creates deserves their own happily-ever-after, no matter how much trouble she puts them through. With that goal in mind, she writes sizzling regency romance stories that skirt the boundaries of propriety to keep readers enthralled until the wee hours of the morning. Heather has published over twenty novels and shorter works. She lives north of Sydney, Australia, and does her best to wrangle her testosterone-fuelled family (including cat Morpheus) into submission.

Helen Banks is going to die. There is no other option: either fight a duel in her twin brother’s place or see him die. But Helen never counted on the man she was to duel with being the same man she admired from afar for so long, Gareth Fairfax, a wealthy lord and the man sworn to exact his payment from the Banks twins through any means.

When Gareth discovers his opponent is a woman and more importantly, the sister of the man he means to kill, he demands satisfaction of some kind. He gives her two choices. She can return to his estate and become his mistress, or he can send her home and settle the matter with her brother by finishing the duel. Helen, unable to ignore the secret longing she’s had for Gareth, decides to accept his proposal and go with him back to his estate, thankful that her desire for him also saves her brother’s life.

Helen accepts the devil’s bargain and agrees to stay with Gareth, at his beck and call, putting more than her innocence in danger as Gareth begins his slow seduction. With each passing hour, she sees the tortured heart of a man who’d once loved and lost. Helen fears she may lose her own heart to him, and believing she can never lay claim to his heart. But as they challenge the limits of their passion and the sensual delight they find in each other’s arms, they may find that love is within their reach.

Lauren Smith is an attorney by day, author by night, who pens adventurous and edgy romance stories by the light of her smart phone flashlight app. She’s a native Oklahoman who lives with her three pets—a feisty chinchilla, sophisticated cat and dapper little schnauzer. She's won multiple awards in several romance subgenres including being an Amazon.com Breakthrough Novel Award Quarter-Finalist and a Semi-Finalist for the Mary Wollstonecraft Shelley Award.

Posted by Barbara Monajem at 6:42 PM No comments: