I'm at Embracing Romance today to celebrate the release of the 99 cent anthology, A Very Wicked Christmas, which includes my novella, Love at First Dance. 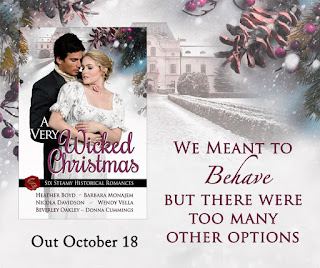 And there's a giveaway -- a paperback of A Very Wicked Christmas. So hop on over and comment for a chance to win.  http://wp.me/p5fbTi-3di

So... I had already posted the cover I thought would be it, but there was a last minute change, and I think it was for the better. Here's the shiny new cover for Love and the Shameless Lady, which comes out in November: 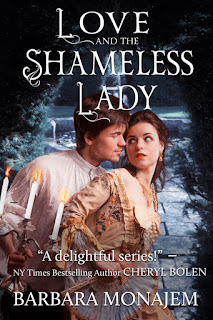 I think it works. She looks as if she could easily be shameless. He looks delightfully mischievous, something I always appreciate in a hero. As long as he doesn't set something on fire...because I don't think he's paying much attention to those candles he's carrying.

Disgraced lady, Daisy Warren serves ale in a tumbledown inn, sings crude songs for the smugglers, and writes romantic novels in her spare time. Shunned by her own class, she’s resigned to her lowly life—until someone tries to kill her.
Gentleman spy, Sir Julian Kerr noses out seditionists and traitors. When he visits the inn to investigate two suspicious Frenchmen, he meets the lovely but hostile Daisy. He doesn’t intend to get involved with her—but then he learns that someone is threatening her life.
He wants to find out more—it’s part of his investigation.
He wants to protect her—he’s a chivalrous man.
He just wants her.
But will Daisy’s bitter past allow her to risk love again?


The pre-order links should be up soon. :)

Posted by Barbara Monajem at 10:23 AM No comments: