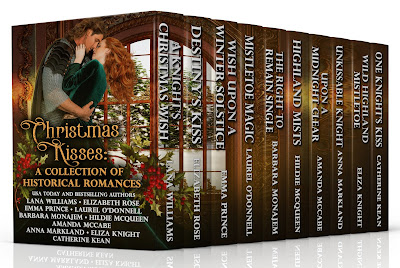 Take a break from the hectic holiday season with this collection of timeless Christmas Kisses. From USA Today Bestselling and award-winning authors, this set includes -

A Knight's Christmas Wish by LANA WILLIAMS -
Weary and injured, Sir Rylan wants only to return home for Christmas but first must deliver terrible news to a now widowed lady. Lady Kayte has been miserable married to a gruff lord and fears her late husband’s brother will claim her. Will the strong, handsome knight be the answer to her prayers?


Destiny’s Kiss by ELIZABETH ROSE -
A surprise kiss under the mistletoe from a burly Scot has the English Lady Annalyse wishing she hadn’t been raised in a nunnery. Ross Douglas has come to England for revenge, but finds his destiny changed in ways he could have never imagined. Can one kiss change the fate of two people forever?


Wish Upon a Winter Solstice by EMMA PRINCE –
When Keita Cameron trespasses onto the lands of her clan’s enemy, she never expects to come face to face with the man they call the Demon of Loch Moy—or succumb to the dark heat her captor stirs within her.


Mistletoe Magic by LAUREL O'DONNELL –
A confident knight arrives home to find his childhood friend grown into much more than he remembered. The lady of the castle keeps a dangerous secret that threatens all she holds dear. Will Mistletoe Magic save them?


The Right to Remain Single by BARBARA MONAJEM –
Thomasina Warren has sworn never to marry, but all that stands between her and the latest stodgy suitor of her father’s choice is a very protective ghost. When James Blakely offers to get rid of the ghost, he thinks he’ll be doing a good deed. Instead, he is faced with the hostile Thomasina, her cowardly suitor, pigheaded father, lecherous cousin, an exorcist monk, and a ghost who warns of danger and deadly peril—and a few short days in which to convince Thomasina that with the right man, she might just want to marry after all.


Highland Mists by HILDIE MCQUEEN –
When a strong warrior, Declan, is forced to marry, he does everything in his power to keep from it. Love comes in the most unusual way in this delightful Highlander romance.


Upon A Midnight Clear by AMANDA MCCABE –
Antoinette Duvall and Captain Mark Payne both live relatively lonely lives on the fringes of English village life, but a special moonlit encounter on Christmas Eve brings them together and alters the course of their lives.


Unkissable Knight by ANNA MARKLAND –
Dervenn de Roure is a hero of the Battle of Hastings, the same conflict that left Victorine orphaned and facing poverty. She must marry to survive. Dervenn's scarred face bears testimony to his sacrifice, but the haughty Victorine cannot overlook the fact he is Breton, not Norman. It might take an unlikely matchmaker like William the Conqueror to make her see Dervenn is the man she needs.

Wild Highland Mistletoe by ELIZA KNIGHT –
Dunrobin Castle is overflowing with excitement and holiday spirit because of the upcoming Sutherland clan gathering. But when a mysterious missive arrives begging Laird and Lady Sutherland for help in a rescue mission, they leave the safety of the castle, and ride headlong into a trap.


One Knight’s Kiss by CATHERINE KEAN –
Days before Christmas, Lady Honoria Whitford buys a book at the market to add to her prized collection. As Christmas mischief under the Kissing Bough unfolds with Lord Tristan de Champagne, so does the secret of the book—one destined to bring great peril but also ever-after love.
Posted by Barbara Monajem at 1:42 PM No comments: