I don’t usually pay attention to Amazon’s recommendations, but for some obscure reason, I did so earlier this month. Amazon suggested that since I enjoy books by Ben Aaronovitch, I should try one by Jodi Taylor. I succumbed and bought Just One Damned Thing After Another, and I’m so glad I did. It’s about historians traveling to the past to see what really happened. (I completely understand the longing to do exactly that—it’s one of the many reasons I enjoyed Connie Willis’ Doomsday Book so much.) 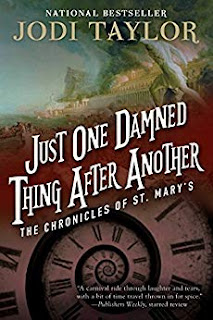 Just One Damned Thing After Another is fabulous. The narrator is a delight, as are the many secondary characters. The title is accurate: Every time you think a problem has been solved, another often worse one pops up. It’s a terrifically exciting, sometimes heartbreaking, and altogether exhausting story, but in a good way. I can’t recommend it highly enough. I bought the second book immediately, started it, and put it down – because I don’t have the energy for that sort of good exhaustion quite yet. No doubt I will return to it soon. There are ten books in the series so far, so lots of enthralling reading ahead! 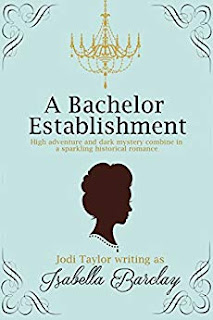 Next I learned that Ms. Taylor also wrote a Regency romance under the pseudonym Isabella Barclay. I downloaded A Bachelor Establishment and gobbled it up. Excellent in every way -- plot, characters, and in particular some absolutely brilliant banter. I’ve been a bit burned out re romances lately, but I thoroughly enjoyed this one.

In my own news, I now have a three-book contract with Level Best Books for my Regency mystery series starring Lady Rosamund Phipps, an aristocrat with a good heart, an inconvenient compulsion, and a lot to learn about the real world.

The first book won’t be out for another year, so in the meantime I’ve started some Pinterest pages about the Lady Rosamund stories and also about The Smuggler’s Escape, a romance which will release this summer. Mostly, these pages will contain images that helped inspire or inform me during the writing process. (No, I don’t want to buy a pair of dueling pistols or a stuffed stag’s head! I just wanted some visuals for my plot…)

Until later,
Barbara
Posted by Barbara Monajem at 10:48 AM No comments: