This month I was on holiday in Europe (which explains why I didn’t post in September—too busy doing a lot of work ahead of time). Once on vacation, I had much more time to read than usual, so I mined my Kindle for something new. There are always a number of books there that I haven’t read – some I’ve been waiting ages to read, others that sounded interesting or were a great deal. 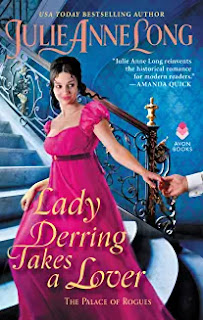 First up is a story by Julie Anne Long, who has a lovely, lyrical writing style that I can't help but admire.

I read all her Pennyroyal Green books, so when my Kindle-mining produced Lady Derring Takes a Lover, I dove right in. The first in her new series, The Palace of Rogues, it's a delightful tale of a near-destitute widow determined to make a life for herself, and a war hero of dubious beginnings who more than anything needs a home and family. There's plenty of action and suspense while these two gradually and inevitably come together.

Ms. Long also sets up the sequel featuring one of the secondary characters – Angel in a Devil’s Arms, which releases in just a few days. Can’t wait! 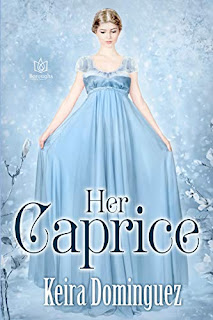 Next up is Her Caprice by Keira Dominguez, a writer new to me. An intriguing beginning and excellent writing got me hooked, and then, to my surprise, there was a little bit of magic!

I confess, I do love stories which have a small amount of magic in them -- one special ability, for example, and the impact it has on a character's life. Not that I dislike stories with lots of magic -- I like those, too -- but a little magic creates some distance from everyday life without feeling like pure fantasy.

Her Caprice features deep secrets, emotional trauma, a hopeless love, a truly vicious villain, and a hair-raising escape: all in all, it's a fabulous romance with that touch of magic to make it perfect. 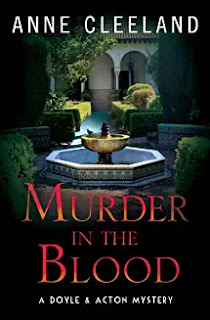 Last of all is a story I’d been saving to read while on holiday: Murder in the Blood by Anne Cleeland.

It’s the tenth police procedural mystery featuring Kathleen Doyle and her obsessive husband, Lord Acton. They are some of the most original and fascinating characters I’ve ever read about, and the series also has that touch of magic that I like so much -- in this case, Doyle’s unusual perceptive abilities.

Murder in the Blood has plenty of twists and turns and complications, many relating to previous stories. I don’t usually care about reading series in order, but I think it’s wise in this case.

Best of all was a bit of a shocker at the end which shouldn’t have been such a surprise, but it surely was. Well done once again, Ms. Cleeland. :)

Proof that I was in Europe: This is me in front of the Pantheon in Rome. :) 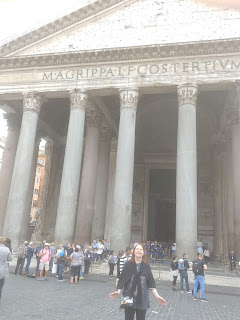 Posted by Barbara Monajem at 6:18 PM No comments: