Today is release day for the boxed set, RAKES AND ROGUES. For only 99 cents, it's a great opportunity to try six different authors of Regency romance. Five of the titles are previously published first-in-series stories. Mine, The Reluctant Seductress, is being published here for the first time. 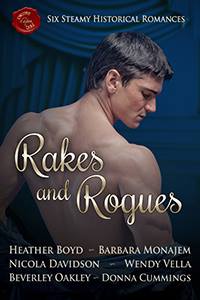 Here's the blurb of The Reluctant Seductress:

When the lady in distress is a rogue…what’s an honorable gentleman to do?

Forced to work as a spy due to her uncanny seductive powers, Lettice Raleigh emerges from the war with her virginity intact and her reputation in tatters. When she is sent for a month to the estate of England’s starchiest marquis as a step toward reentering polite society, Lettice knows it’s a hopeless cause—but she doesn’t reckon with Lord Hadrian Oakenhurst, a younger son with a strict sense of right and wrong and an agenda of his own. Will Hadrian succumb to her seductive wiles—or has Lettice at last found the one man she can’t resist?

And here are some taglines for the whole set:

Rakes and Rogues abound in this six-book collection of secrets, spies, vengeance, and lust. From London’s glittering ballrooms to the intimate mischief of a pre-season country house party, be captivated by these sexy first in series Regency romances.

A duchess and her son’s heir join forces to solve a family mystery in ENGAGING THE ENEMY by Heather Boyd.

Barbara Monajem’s lady spy is a rogue in distress in THE RELUCTANT SEDUCTRESS.

An earl’s sensible plans go awry as he becomes embattled with a sworn enemy, and his best friend’s sister, in TO LOVE A HELLION by Nicola Davidson.

In Wendy Vella’s LORD GALLANT, newlyweds hide secrets and confront dangers of the heart as well as a deadly foe.

When a sizzling encounter with a handsome stranger at a masquerade ball leads to love, Fanny's dreams have nearly come true in RAKE’S HONOUR by Beverley Oakley.

In LORD WASTREL by Donna Cummings, a former rake needs a scandal-free wife to help him raise his child, but he's falling for London's most notorious woman instead.
AMAZON    BARNES & NOBLE   KOBO   iBOOKS
Posted by Barbara Monajem at 12:30 AM No comments: