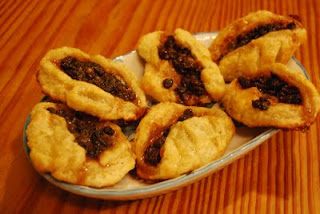 The heroine of one of my historical novels is from Lancashire, England, and despite her mother's prohibitions, she loves to bake and learned in secret from their cook whenever her mother wasn't around. The obvious choice was the delectable Lancashire specialty, Eccles Cakes. My heroine only bakes in one scene of the book, but still, I decided to try making them myself, because I wanted to get it right.

I didn't. In fact, I made a major flub. (Fortunately, no one has bought the story yet, so whew! I have plenty of time to fix it.) Eccles Cakes are made with puff pastry, which is not quick or simple to make; in fact, it's quite a lengthy process. My heroine can't merrily roll out the dough and bake Eccles Cakes in an hour or so. But I still wanted to make them - hadn't had any for years and years - so when I found an old package of puff pastry in my freezer, I thought, woo-hoo! Eccles Cakes today!

Here's a recipe for the filling:

6 tablespoons butter
7/8 cup brown sugar
1 cup currants, raisins, or a mixture of the two
1 tsp. cinnamon
1/2 tsp. nutmeg
Rind of one orange, grated. Theoretically, this is optional, but I think the orange rind is what makes the filling absolutely superb. I used one of those big, juicy navel oranges with thick, tasty rind. Yum!

Melt the butter and mix in the rest of the ingredients. The filling is so delicious that I kept sneaking spoonfuls.

To make Eccles Cakes, you're supposed to cut rounds from the pastry, put a dollop of filling in the middle of each round, moisten half the edge with milk or water, bring the sides to the middle (i.e. enclosing the filling), and press together to seal; then turn the cake over and roll it ever-so-gently and pat into a round shape. Greedily, I put in too much filling, and then, when the edges kept coming apart, I gave up and dumped the pastries into the pan (greased, by the way). You're supposed to brush them with egg and a little sugar (I'm pretty sure I remember the sugar from my childhood), and cut a few slits in the top of each cake. Which I did, but my cakes had so many holes they didn't need the slits. Bake them at 425 degrees for about 15 minutes.

They tasted great, but they looked awful. The picture (above) makes them look much better than in real life. (Kind of like professional author photos, but that's another story.) I don't know if the puff pastry was too old, or whether it was just my laziness in not following the directions carefully. I'll try again some other day. If I screw up again... Well, they taste wonderful, which is all that really matters.

Back to my heroine, stuck in a scene that didn't work. I decided to have her make Chorley Cakes instead. They're another Lancashire specialty, and they're a lot like Eccles Cakes except that they're made with regular pastry instead. Easy!

Not really. My pastry turned out all right, but again I probably put in too much filling, and I didn't even try rolling the dang things ever-so-carefully into a roundish shape. I just cut the pastry into squares and, using the same filling, made turnovers. I baked them at 350 degrees for longer than the Eccles Cakes. I didn't write down how long they took, but it was probably closer to half an hour. If the pastry looks done, that's good enough.

Bingo! Chorcles Cakes or Checcles Turnovers, scrumptious by whatever name. 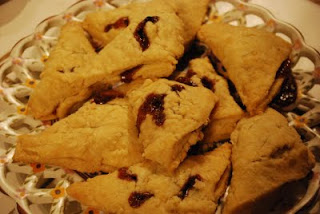 Posted by Barbara Monajem at 11:48 PM