Clearly, I'm not cut out to be a blogger, or even much of a social media-ist. (Not a real word, I guess.) Social media feels to me like a game of Whack-a-Mole. You think you've taken care of one thing, and another pops right up. Argh.

Anyway, here I am after a couple of months' absence. My new release, A Lady's Lesson in Seduction, which is a Regency Christmas story, has been out in the US for almost a month and will be out in the UK on November 1st.

Today I'm blogging at the Pink Fuzzy Slipper Writers about an entirely different subject -- my vacation in Italy -- but I'm giving away a free download of A Lady's Lesson in Seduction for either Nook or Kindle to one person who comments there. 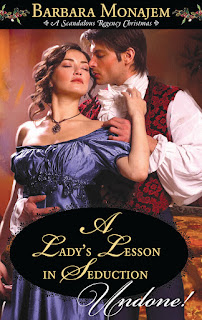 Once a notorious rake, Camden Folk, Marquis of Warbury, is now consumed by desire for only one woman: beautiful young widow Frances Burdett. And the Yuletide festivities at his country estate present the perfect opportunity for seduction…

After her brief and unsatisfying marriage, Frances Burdett swore never to become tied to another man.  Then a passionate kiss under the mistletoe reawakens longings she thought buried forever. But can she give in to the pleasures of the body with a rogue like Cam—without losing her heart?

Frances should never have agreed to go to the orchard with the Marquis of Warbury—to gather mistletoe, of all things. She sent him a fierce, furious glare. “If you must have it, I don’t enjoy kissing.”

He eyed her from behind the apple tree. “Not at all?”

“No.” She pressed her lips together.

Her voice was low, suffused with passion. “You can’t possibly judge how that—that invasion made me feel.”

“That bad, was it?” The marquis reached up and snipped with his shears. “You’re right, I can’t judge, but the general popularity of kissing tells me you were merely unlucky.” He came around the tree, a sprig of mistletoe in his hand.

What a fool she was; in spite of bitter experience, she wanted to kiss him, wanted kissing to be wonderful. How stupid! She was much better off—much safer—as she was.

He kissed the fingertips of his gloves and blew. “That wasn’t so bad, was it?”

He picked a berry from the mistletoe and dropped it. “We’ll make it a very light kiss,” he said, coming closer. “Short and sweet.”

She didn’t trust him; she wanted yet didn’t want—

A flurry of snow tumbled from the branches above, distracting her. He swooped in, dropped a swift, cold kiss on her lips, and drew away—but not far. “Was that too unbearable?” Another mistletoe berry fell to the snow.

“Well, then.” He took her hand and pulled her behind the tree. “If you don’t want me to invade you—accidentally, needless to say—you’ll have to keep your mouth shut.”

“Of course I must. No talking.”

She gave up, shutting both her mouth and her eyes. It was her own fault for coming to the orchard this morning, but she’d enjoyed their time together in the middle of the night so very much. It was only a kiss.

Nothing happened. She opened her eyes again. He was contemplating her mouth from under his lashes. “You have lovely lips.”

Through her teeth, she said, “Get it over with.”

“I’ve never kissed a martyr before.” His lips curled in a lazy smile, and then he pressed his mouth coolly to hers and withdrew again. “It requires a more careful approach than we disgustingly hasty men are used to.” He flicked another berry off the sprig.

She couldn’t help but watch his mouth. What was he going to do, and when?

“Close your eyes, and whatever happens, keep your lips together.”

This time his mouth lingered on hers a few seconds, then pressed light kisses from one corner of her lips to the other. Kiss. “One.” Kiss. “Two.” Kiss. “Three.”


Posted by Barbara Monajem at 8:00 AM