Home and Another Bayou Gavotte Giveaway 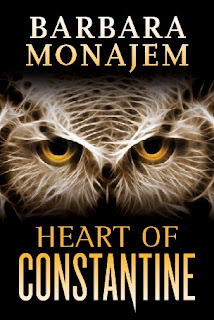 Got back home from Europe last night -- just in time for a guest post at Collette Cameron's blog, including an international giveaway of one of the Bayou Gavotte books (winner's choice). Hop on over if you'd like a chance to win. I'm celebrating the release of Heart of Constantine and will be for the rest of the week. There will be an interview with Constantine Dufray's spirit guide on Thursday at Suzanne Johnson's Preternatura, and a post on my Native American hero on Lois Winston's blog on Friday.  (Also, there are a few hours left to enter the giveaway at GraveTells.)

I adore the owl on the cover of Heart of Constantine. He's both beautiful and menacing -- just like Constantine, although the owl is a character in his own right.


I'm no photographer -- most of the time I forget to take pictures -- but there are some of Roman artifacts in my dh's camera which I will try to post here soon. Why Roman artifacts? Because they play a part in my next two novellas, which come out in November (Under a Christmas Spell) and January (Under a New Year's Enchantment). They're mostly in the second story, where the hero has dug up a hoard of Roman coins. I will get the covers and blurbs up soon!

I wish I'd had time to visit some Roman ruins while in Britain -- maybe next time! I would love to write a romantic story about Roman Britain one day... After I write one that takes place right after the Norman Conquest... Right after finishing the Regency fantasy I'm working on now... and the Bayou Gavotte novella I'm revising.. and...and...and.... So many stories, so little time. :)

Posted by Barbara Monajem at 5:30 AM