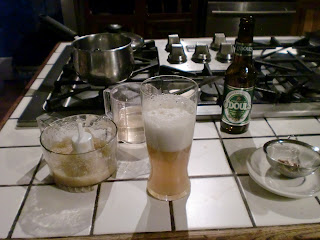 This beverage, made with beer and apples, really surprised me. It does look a bit like wool—perhaps that’s where the name comes from. Making lamb’s wool is a Christmas tradition on the estate of the hero in my holiday novella, A Lady’s Lesson in Seduction, and I couldn’t resist trying to make some for myself. It’s wonderful – and if you’re not a beer drinker, it doesn’t matter. It needn’t taste much like beer if you add enough apples and syrup. (My dh, who dislikes beer, loves this stuff and asked me to make it again. Oh, joy!)

I surfed for recipes, found several, and picked the first one I’d come across, mostly because the apples were cooked on the stove rather than baked in the oven. Just a matter of personal choice.

To make a long blog short, if you’re in Britain, just go here and follow the recipe (http://www.independent.co.uk/life-style/food-and-drink/recipes/lambs-wool-1810976.html) from Nicholas Strangeway. If you live Elsewhere, you may have to make adjustments re ingredients and measurements. Regardless, print out the recipe first and then read on – I’m only discussing the minor changes I made.

I went way wrong the first time, because I used whichever apples I happened to have in the house. They were far too sweet for this recipe. I should have looked up Bramley apples and found out more about them before I started, but I’m an impatient cook.
.
Onward to the second time, which worked beautifully: I used Turbinado sugar instead of Demerara (as far as I know, they’re similar in flavour), Granny Smith apples, and O’Doul’s (because I drink only non-alcoholic beer, and O’Doul’s is my favorite). You’re on your own re any other kind of beer or ale, but please, please, start out with it at room temperature. I’m not saying this because I was brought up on room temp beer and like it that way (although this is true). I’m saying it because you’re going to warm the beer a little before putting the drink together, and the gentler and quicker the warming process, the better for the lamb’s wool.

If you’re in the US, like me, you’ll need a cooking scale to weigh some of the ingredients. Either that, or you can use my approximations, but really, the amount of sugar required is a combination of personal taste and the variety of apples you use. You can also adjust the flavour of the lamb’s wool by the kind of beer or ale you choose and by adding more or less syrup and apple puree… As usual, I can’t just come up with a simple recipe. Everything is approximate and adjustable in my cooking world.

For the sugar syrup, I used less than a cup of granulated sugar, a little more than ¾ cup of water, and ¾” of a cinnamon stick. The other ingredients don’t need measuring. Use all of them. It’s well worth buying allspice berries and fresh ginger, for example, even if they’re not household staples for you. The syrup is magnificent – so delicate and tasty that it’s heavenly just on its own.

For the puree, I used a few large Granny Smith apples and less sugar than it called for. Somewhere between 1/3 and 1/2 cup seemed good to me, but I didn’t want to make the drink overly sweet. The nutmeg and ginger were as called for in the recipe.
Try it! It’s a warm, wonderful winter drink. 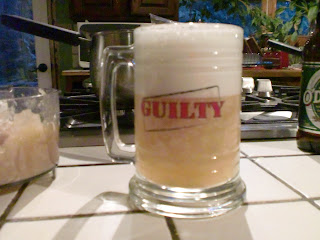 Posted by Barbara Monajem at 8:41 AM